Transfers of IPv4 Addresses from /8s Held by One Organization

In 2011, as Nortel's Director of Engineering I started the orchestration of the sale of Nortel's 47.0.0.0/8.  Over time this undertaking has resulted in the sale of approximately 85% of the /8.  Something that has been discussed in the ensuing six years, is how many other “organization” or “company” owned /8s might ultimately be sold.  IPv4 Market Group has examined the before and after records in the Regional Internet Registry (RIR) databases, in addition to the RIR transfer logs, to see how many of these /8s have moved.  All data being analyzed is publicly available.

As shown in Figure 1 below, there are 26 /8s that fall into the category of “organization” held.  In this inventory, we ignore /8 blocks held by the US Defense Organizations, because there is no indication that the US Government has any intention of moving them in the future.  We do include the UK Government’s two /8s, as we have seen past movement by the Department of Work and Pensions.   We also include the US Post Office, as it seems likely this organization might desire a few million extra dollars at some point. 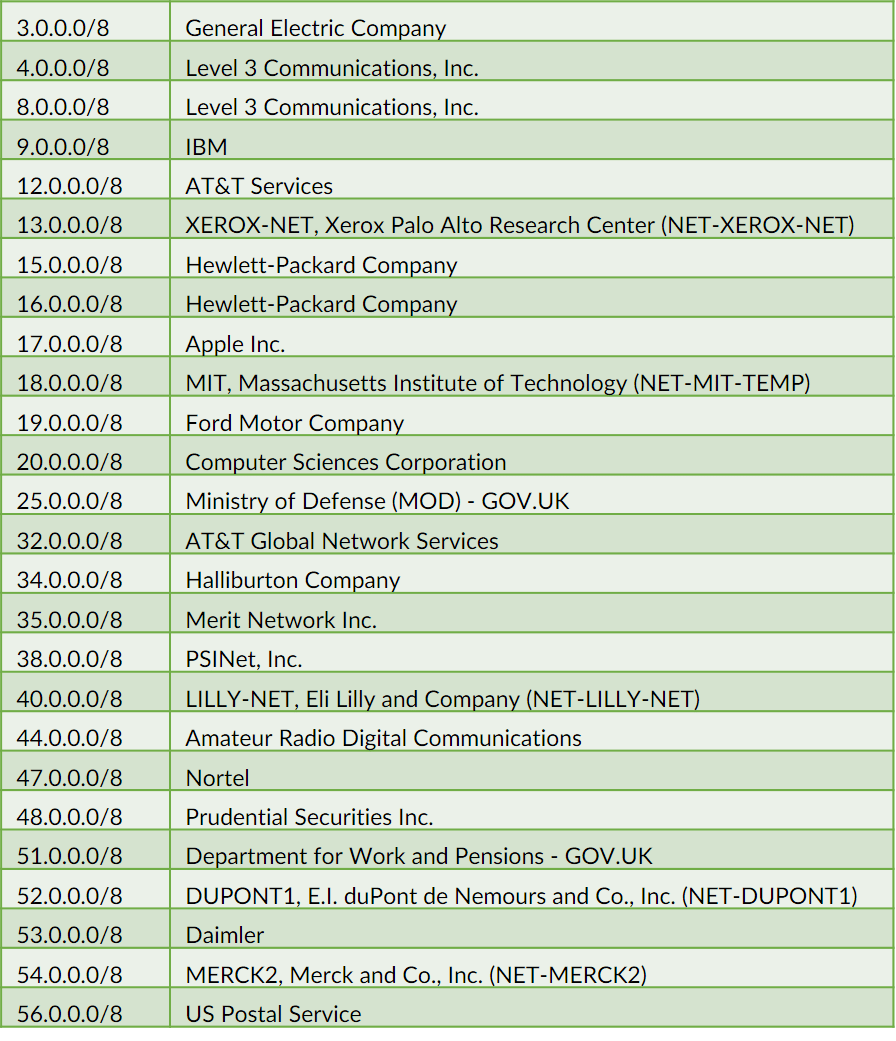 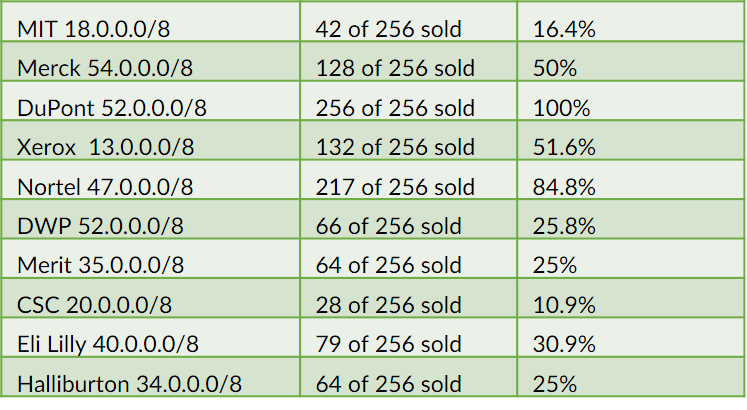 Some of the transfers from these ranges, including other large transfers not from a /8, are shown in Figure 3 below. 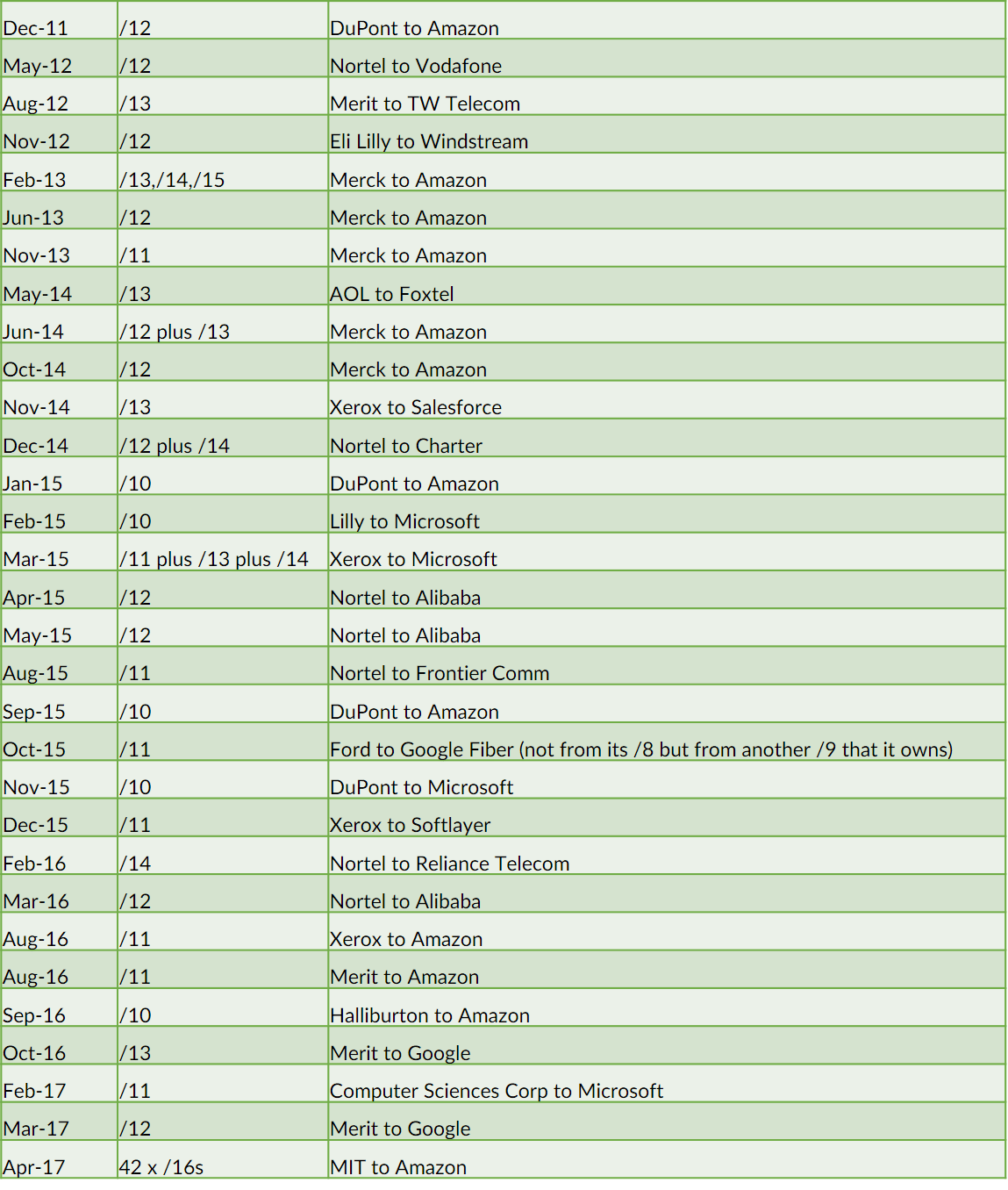 There are notable points to be made:

1) We know that approximately 16.2% of the 26 /8s have been transferred. This means that organizations are interested in monetization and that the trend should continue as prices rise.

3) Can we predict how many of these /8s might still transfer? Those entities that have already sold some of their /8 range will probably continue to sell more over time.  While 42% of the 10 /8s have already been sold, perhaps another 40% will move in the next five years, totaling 1024 /16s moved from these entities.

4) What about the 16 /8 blocks from entities that have not yet sold a /16? We can speculate that some companies will never sell because they don’t need the money, and having the IPs is more of a strategic advantage than selling them.  Or, they might not sell because even though the IPs may be sparsely used, it would take more work than they are prepared to undertake to free the blocks for sale. These could be the reasons why Apple, HP, and IBM never sell. However, other /8s may be available.  We can scan the list and predict that at least six of these /8s will be partially sold in the near future.  If they sell half of their holdings, it would total another 768 /16s in the IPv4 transfer market.

5) Who is buying the large blocks? There are 14 different buyers shown in Figure 3  Two entities in particular, Microsoft and Amazon, have received large portions of the transferred IPs.  Microsoft has bought from 4 of the 10 sellers (CSC, DuPont, Xerox, DWP) and Amazon from 5 of the 10 (Merit, MIT, Xerox, DuPont, Merck).

6) Is there a market for the large blocks of the future? IPv6 is still years away from a critical mass and we continue to hear about the costs and headaches of its implementation.  As long as IPv4 is the “best” and cheapest solution, we will continue to see a market.  The question then becomes, “what is the expected price for these large blocks?”  We are already seeing $13 to $15 per IP for large holdings, most likely because they are so rare.  Is there a price point where buyers walk away?  Yes, of course, as we are seeing some companies refuse to pay the market price already.  Microsoft and Amazon have deep pockets, so it would be speculation to put a number on their maximum.

This analysis of the 26 single-owner /8s has shown that these large blocks are being transferred in large sub-allocations, and the /8s are not filling the /16 market.  Ten of the 26 have already done some selling, and we expect this trend to continue, to more than double the large block sales made so far.  The IPv4 Market has some legs still!